The Sun Will Come Out Tomorrow: Entrepreneurial Lessons from Elon Musk

I am not surprised! Tesla just unveiled the new model 3, which is an affordable version of Tesla cars. Elon Musk finally introduced a Tesla for the average earners and that’s what I was expecting him to do, as he has been trying hard to make space travel available for everyone too. Yes! This is something unreachable for the time being, but Elon’s previous successful startups were all sort of unreachable dream-like ideas that came true.

In the book, “ Elon Musk: Tesla, SpaceX, and the Quest for a Fantastic FutureAshlee Vance unleashed plenty of facts about Musk’s life, his entrepreneurial journey, challenges, and how he brought the impossible into reality. Vance started the book from Musk’s childhood and family background and continued to his latest achievements. Although Musk had some corrections and took issue with some parts of the book, there are lessons for entrepreneurs in cultivating Musk’s life. I strongly recommend reading the book, as the lessons I am dealing with in this post are not all lessons of the book.

But man is not made for defeat,” he said. “A man can be destroyed but not defeated.” – Ernest Hemingway, The Old Man and the Sea

Throughout the course of the book, every time Musk was dealing with a challenge, I was thinking of “The Old Man and the Sea” story by Hemingway. Instead of giving up, Musk showed real resolution. His perseverance made the impossible happen and separated him from those who could not resist the challenges.

One thing that musk holds in the highest regard is resolve, and he respects people who continue on after being told no.

Musk loved the author’s persistence in getting yes for an interview with him. This was something that Musk liked and Vance finally got the combination to Musk’s safe after being rejected couple of times. This is what showed how Musk loved resolved people and he was a kind himself too. 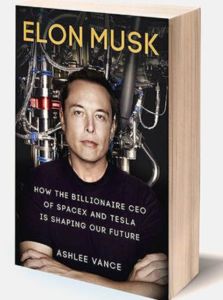 On the flipside, we are now facing the epidemic culture of the lean startup that recommends entrepreneurs to be ready for a pivot and specially making an MVP in business incubators and accelerators. I have already mentioned some of the aspects of lean startup proposition, but Musk’s clear vision and being a believer is a proof that makes lean startup a pitfall for startups, in particular as the measurement of MVP does not have a clear method. Musk believed in Space X and building rockets from scratch and had really tough times in both Tesla and Spece X at the same time, but he did not give up neither in trying to build rockets nor making electric cars. I couldn’t really help being sensitive in the first Space X successful flight moment that happened after couple failures and in the toughest financial time of both Tesla and Space X.

The Power of Good Habits

Musk used to be a book worm since his childhood. There were cases during their family shopping that Musk was lost and family members knew where to find him: sitting in the corner of a book store, reading a book. During his time in South Africa the library ran out of book and Musk even started studying encyclopedia.

Reading is a good habit and Musk had this habit of reading since childhood. By reading Musk’s childhood story and connecting it to his current situation, it is evident that his vision of space exploration came from the books he read in his childhood.

Do not Be Afraid to Get Your Hands Dirty

This is for sure one of the main characters of successful entrepreneurs that they do not wait for things to be done by someone else. They get involved and do whatever they can along with their team. Musk was not afraid of getting his hands or clothes dirty and as mentioned in the book, he once tested a part himself without being worried about his Italian clothes and shoes that were all smeared with epoxy

The Importance of Building the Network

Entrepreneur’s network is one of the main recourses that is crucial for success and is not as easy as it seems for startups. After his time in Paypal, Musk targeted the space, which was his childhood fantasies for years. At the first step, he chose LA to live, which could make his access to aerospace community easier. The next step was to build the network. So, in order to do that Musk joined a $500 per plate event of an NGO, which was working on space research and donated $100,000 later for one of their space researches. Instead of sitting at a computer and doing desk research or shooting some e-mails, Musk did choose the better approach. He met people of space community and talked to them in person and soon got involved in their research.

Most people think that building a network is an easy task specially those who are more socially confident, but that is not all you need to build a good and worthy network. Taking real action and spending money to build his network in a new industry is something that Musk taught us all.

Disclaimer: The title “The Sun Will Come Out Tomorrow” is mentioned in the book as Musk wrote it on his paper about the essence of getting solar.
Amir Salehi
Previous post
Next post